With the first month of the New Year 2011 about to come to a close and the Chinese New year of the Rabbit creeping into view, I thought it was time to bring everyone up to date with the latest developments at Growing Together.


The project has been running for a little over two months, and has been an unqualified success. We now have seven schools involved, with sessions held either before or after the noon-day divide, depending upon the schools’ individual transport schedules. Then, after school hours, we try to see children who can come privately with their parents, family or therapists, on a one to one basis. This allows people with special needs other than autism to become involved, and we have one boy attending who has been blind since birth, as well as others who are hearing impaired. The plan for the future is to extend the Growing Together programme to InSha’Allah includes children from local orphanages and those who are victims of domestic violence and/or abuse.

Our horse therapists continue to amaze and inspire their human counterparts! Iago has proved himself a true diamond in the rough, happily spending many hours with the children with unending good grace and patience. In one instance, working with a young lad who has high anxiety issues, Iago stood like a rock for half an hour while the boy summoned up the courage to move from twenty feet away to just inches from Iago’s side. Iago is a horse that truly gives of himself with the children, and he is definitely one that I constantly rely upon when I need a horse for a child who is nervous and afraid. 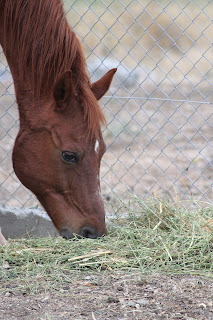 Reem, our “queen”, continues to look down her royal nose at us adults but is extremely gentle and caring with the children. While known as a “spirited” ride, when working on the Growing Together site she is the epitome of quiet grace. At one of the last sessions at the end of December, one of our children had his first epileptic siezure while he was walking with Reem down the track.. She immediately stopped and waited motionless beside him, while his carer did what needed to be done in this upsetting situation. The boy thankfully recovered very quickly, and once back on his feet wanted to continue walking with the horse! Of course, this had to be forgone for an immediate visit to his doctor. 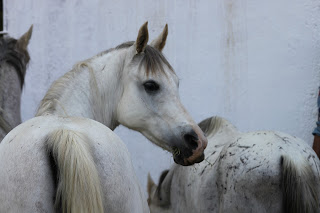 Zippo, the tall, dark and handsome one, who won the hearts of ALL the teachers and carers, has been retired from the programme as he obviously thought it was too much like hard work! Every time we went to lead him from the paddock he would gently nip his handler as if to say, “No thank-you, not today,” so I have bowed to his preference and replaced him, although none of the others are as eye-stoppingly stunning! 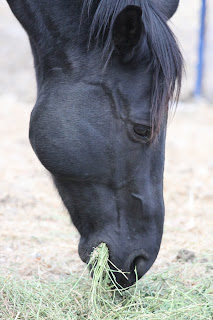 As the programme expands, we are adding horses to make certain that the old favourites do not end up over-worked and jaded. Istabraq is still with us, as are Areej , Burkan and Chance (who is now happily a part of the herd and no longer an outsider!), but we are now also have a big bay gelding called Jericho and another called Skeeters…for "Mosquito," I am told! Alain continues to make the odd appearance when we need just one horse to familiarise a child with the programme, and he certainly does love to flirt with the Ladies as he is walked over from the Stables.

Due to the increase in numbers I have recently started advertising for volunteers to help with the weekly sessions, and have been very fortunate to have gained a young lady from Canada who is living in Amman, Iona, and a fellow Englishwoman, Jenny. I know that there are others who also hope to join us very soon! Without the help of such good people the project would be much harder to keep running smoothly, as the more horsey people I have helping me, the longer the children can stay on the horses during a session. 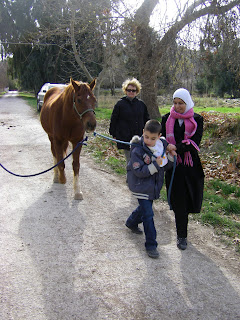 Another exciting development is that the local glossy magazine Luxury has generously offered to run a series of articles on the various PAF projects, including of course Growing Together, and I am hoping that we will also soon be featured in some of the Arabian horse press in other parts of the world. It is such a tribute to this old and noble breed that they can literally just “step into the shoes” of 'animal therapists', without any lengthy or specialised training. So often the Arab horse is maligned as being either just a pretty toy at the end of a lead rope or a mad, unmanageable creature that is too untrustworthy to turn your back on. Well, if nothing else, Growing Together continues to prove how inaccurate and prejudiced those perceptions are.

In much the same way, the children we work with are also defying stereotypes, as they continue to come out of their shells and interact with the horses and the natural world around them. One boy, who used to always just sit and stare vacantly at the ceiling, now really interacts with not just his horse but also his teacher. We have many instances of children who start out nervous of the horses but who soon find a link with them and then want to sit aboard one…and often do not want to come off! Some children have never managed to focus on anything and yet find that they can not only hold a rope but can also use that rope to get a certain response from their horse, and do so! For many of the children I work with, it is a new experience to be out in Nature and to be allowed the freedom to enjoy that nature, not having to worry about getting dirty, getting wet, or simply running loose without having a hand held. This freedom is a wonderful gift, and for that the site donated by HRH Princess Alia is priceless and unique. 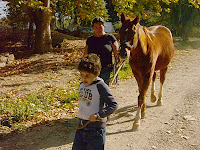 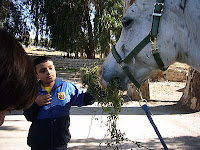 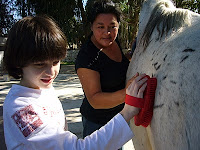 Finally, the most touching moment, and there are many when you work with special needs children and animals, came with our blind boy, who although fifteen years old now has a mental age of eight due to complications in his incubator soon after birth. His parents came to me through one of the schools that I work with, because they wanted to find him some form of enrichment beyond what he was already doing.
His first session, one to one with just him and his parents, was derailed because all he could focus on was how hungry he was and dear father had forgotten the picnic in his haste to get to us! However his second session was far more successful. To begin with I asked his Dad to explain to his son what he was feeling as (let’s call the boy Ben) Ben stood besides Iago (yup!) and felt him all over. His Dad told me that Ben has a toy horse at home so he knows what one feels like…of course, Iago is slightly bigger….We then set off down the hill with Ben holding onto Iago and his Dad holding onto Ben. As we walked, I asked his Dad to explain to Ben what the sounds and smells were that he would be experiencing as we went, and Ben walked confidently along holding onto Iago’s rope as he managed the rocky track. When we returned to the yard, I asked if Ben would like to get onto Iago, and this he did…Now, imagine what that actually MEANS, a blind boy actually being trusting enough to get up onto a horse for the first time EVER…and then, we took our first step. And then the second. And by the third step Ben threw back his head and laughed…and laughed and laughed. It was the most wonderful moment and both Ben’s father and I just stood spell-bound at the sheer miracle we were witnessing. To remember it brings tears to my eyes; on the day, Ben’s father did well not to cry. 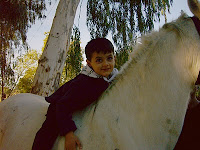 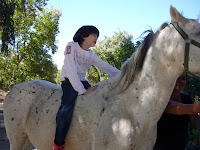 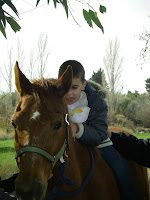 And so we go on. Growing Together, although relatively new, has been able to establish itself as a programme that is having amazing results. It continues to be offered free of charge by PAF to all individuals involved. Without the vision and confidence of the Princess Alia Foundation none of this would be happening. When I first came over to Jordan at the invitation of Her Royal Highness and Sarra Ghazi, their CEO, I was eventually told, “This will be your baby, YOU will have to run with it”…… Well, MaShaAllah, I’m still running………

Posted by Princess Alia Foundation at 14:21 No comments: