Music : From this moment on - Shania Twain.
Posted by Princess Alia Foundation at 17:26 No comments:


As another year is ending, it’s time to introduce the two latest members of our growing pride of lions . Recently, we got a phone call from the RSCN, saying they were on their way to us with a very young female lion cub. We really didn’t know what to expect, and when they arrived, we were in no way prepared for what we had in store. Being just a few days old, she was the size of a month old kitten, weighing about 1500 grams, toothless, helpless and blind. None of us had ever seen such a young cub before, and it was honestly hard to tell that she was a lion! 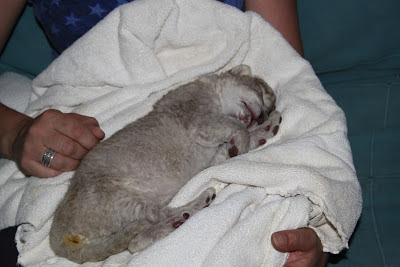 Having no experience with baby lions this young, all we knew was that we had to do everything in our power to keep this girl alive and give her a worthy future. Our resident vet examined her and took her home for her first night. Since she was heavily pregnant herself, there was no way for her to keep this cub at home and give her all the time, care and attention she needed, so we had to think of a solution. Since the cub was so young, she needed around the clock care, which is quite a task and requires big commitment. Luckily, just a few weeks earlier, our –now-  new team member had moved here from Europe, and when she and her husband heard about the cub, they immediately offered to take her in. So our vet handed the cub over to them and we all prayed for the best outcome. Our prayers have been answered; the cub is doing great and is now out of the danger zone. She is being hand raised by the couple, who are caring for her 24 hours a day, like young parents with a newborn baby.


Barely 3 weeks later, another call came in from the RSCN: another lion cub had been found when attempting to smuggle him across the border; a boy this time, and they were to arrive at New Hope within an hour. The cub, about 7 weeks old, was also too young to be put in an enclosure at New Hope, and so our ‘babymama’ was called and asked if she was willing and able to take in a second one! However exhausted and sleep deprived from parenting the other cub, she answered without any hesitation “Bring it on!!”


The new cub arrived at New Hope late in the evening, and it was clear that this was a completely different story. He was far too small for his age, nearly blind and very stressed and traumatized. Assessing him made it clear to us that he must have spent most of his life in a tiny, dark cage and had just been getting enough food to keep him alive. After being examined by the vet, he went home with his new parents, and we were all hoping they would be able to pull him through, although his physical and mental state gave us much to worry about.


The main challenge was to get him to eat, since he didn’t seem to have an appetite at all. Because he was also refusing the bottle, he was fed with a syringe, forcing down a few drops of milk every hour, around the clock. It was a struggle, but after a few days he seemed to get a bit stronger and the feeding started to get a little easier, although the syringe was still the only way to get food into him. 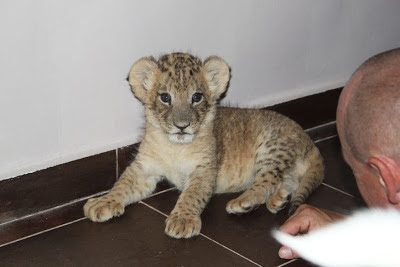 His stress level didn’t go down though, and that was a big worry.  Our unwritten rule is to keep new animals separate from others for at least a month, but after a few days it was clear that what he really needed was physical comfort from his own kind!  The decision was made to introduce the two little ones to each other. The female cub was doing so well and was getting stronger and bigger every day and we were hoping that she could help him relax, which in turn would help him to get stronger and healthier.


The cubs were introduced to each other, and while the boy sat quietly in a corner, staring at the ceiling in full denial, the girl, who had never seen another lion before, crawled up to him on her big baby-belly, dropped herself next to him and put her paws around him. The boy started to relax immediately, and they are now the best of friends! 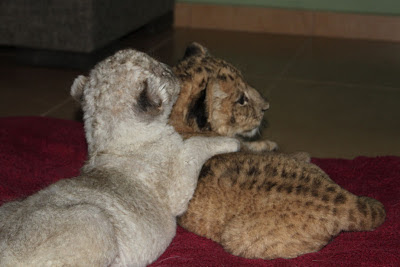 In the above picture, the agedifference between the two cubs is 4 weeks. The difference in size however is very small, which is clearly a result of malnourishment in the male cub in the first weeks of his life.


These cubs are such a blessing in all of our lives, and in each other’s life as well. By now we’re sure both will pull through and we’re happy to be able to say that two more lives have been saved!


Although many of us grow up dreaming of raising lions…one thing we can say without a doubt is that lions belong in the wild. Watching in desperation as these two young cubs fought for their lives, having been stripped from their mother’s love and nurturing, was one of the hardest things to have had to endure. Wildlife is called ‘wild’ for a reason…