Spring at Growing Together 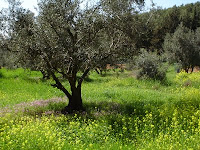 With the coming of Spring, and a profusion of flowers and greenery on site, Growing Together has acquired itself a new logo. Many thanks to Iona Fournie-Tombs, who took my rough concept and made it into a cyber-friendly reality!! As you may realize, the horse in the design bears a striking resemblance to Iago, and it is no little coincidence that the horse also sports a small star!


In my trusty “Insight Guide to Jordan” I recently read that Islamic Traditions attribute their (the horses’) source to the South Wind:
Then God took a handful of wind and fashioned from it a chestnut horse. He said, “I have created you, Arabian Horse; I have moulded you from the wind; I have tied Good Fortune to your mane; you will fly without wings; you will be the noblest among animals……God then blessed the horse with the sign of glory and happiness and marked his forehead with a star…” 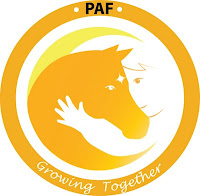 Although I can claim total ignorance of all of this when I did the first rough sketches for the logo several months ago, I think it is strangely fitting that it should all have worked out so beautifully.


Another new addition to Growing Together is a wonderful play apparatus, generously donated by Shakir Mohammed Esmayeel of EAM Textiles. The play equipment had been in storage for a year waiting for “the right cause” to come along, and we were lucky enough to have been judged worthy! The children really love the equipment, as can be seen in some of the photographs, and it is a real Godsend when the children have to wait for their turn with the horses. 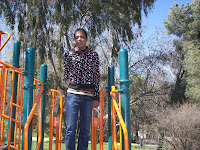 In fact, some children are SO enamoured that they rather play on the slides than on the horses! But that is fine too, since the real purpose is to have the children enjoy themselves and to interact socially. And with the clement weather and increased rainfall, our lake now holds many dozens of frogs and toads which some of the children take great delight in watching.
For those of our followers who are Arabian Horse enthusiasts in the UK, there is now an article on Growing Together in the Arabian Magazine edited by Sam Mattocks. It is hoped that the international audience of the magazine might include a child-loving philanthropist or two!

Although it has only been a couple of months since my last Blog entry, we have had some amazing developments at Growing Together with the children.

The boy who has had high-anxiety issues for many years will now walk down the track happily beside a horse and, with encouragement from his teacher, holds onto the lead rope as well. Three weeks ago he finally found the courage to actually touch the horse, albeit for only a fraction of a second, but he did repeat the gesture two more times! Too fast to be caught on camera though so we have no photographic evidence …Yet!! Nonetheless, the memory of the smile that flashed onto his face as he realized just what he had done is an image that I will never forget. Sheer unadulterated JOY.

Another young lad, about nine years of age, has lived with the complications caused by his mother having toxoplasmosis during pregnancy. When he came to Growing Together he was distant, gazed vacantly and did not interact in a pro-active manner. At school, his teachers now tell me that he recognizes them, he communicates his likes and dis-likes, he follows instructions, he is more independently mobile and he can now drink independently as well.

The boy featured in the magazine article, A Boy Called, “Horse!!” is now not only speaking but actively making choices at school and inter-acting with his peers on a daily basis; he expresses opinions and makes choices, he plays football. 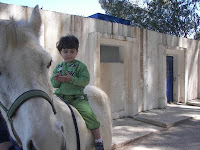 One of our other boys who also started out anxious of the horses and barely verbal is now impatient to join in with the horses and happily jumps onto their backs without any hesitation. He is now able to communicate with his mother, making connections between her comments and future actions. When she tells him, “No school tomorrow,” he replies with “Horses!” and if she tells him it is “Friday tomorrow” he tells her “Farm!” because that is where they go on Fridays.
Suzanne, one of the few girls who come to Growing Together, is eighteen years old and has very elderly parents. They have cared for her all of their lives within the home, and only recently has Suzanne joined main-stream schooling. Understandably she was very anxious and scared of the unknown outside world, and showed her anxiety by biting and kicking anyone close enough to be a target. Her first session at Growing Together was a huge challenge for her and her teacher, but only three weeks later Suzanne is accepting of the horse which walks beside her and also willing to ride on one, albeit very slowly. 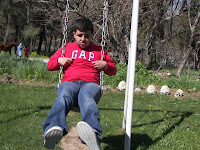 These are just some of the amazing anecdotal testimonies that we are receiving from teachers and parents whose children are involved with the Growing Together programme. We cannot say, of course, that the changes are due to Growing Together, but we can say that they have taken place after the children started coming to Growing Together.
Finally, my special moment happened in the foyer of the Holiday Inn Hotel at the Dead Sea...

My friend and I were waiting to return to Amman when we both spotted a lady on the other side of the room with a large child held on her hip. Due to the size of the child, the woman’s dress had hitched itself up around the child’s foot, exposing quite a decent length of leg. As soon as she was within earshot I called out to her, “Excuse me, your skirt….” And she quickly put the child down and came over to say thank you. As she was walking away her boy turned slightly and I recognized him as one of the children who comes to Growing Together. He is a challenging child, caused in no small part by his hyper-sensitive ears which appear to be an almost constant source of discomfort. The doctors say there is nothing wrong and so do nothing to help him…he is often seen screaming with his hands over his ears, or throwing himself on the ground in a “tantrum”…

“I know your son,” I said, ‘He comes to horse therapy with me.” At which point he turned around and saw me from about ten feet away. Immediately he ran over, threw his arms around my neck and kissed me on the cheek! I don’t know who was the more surprised, me, his mother, her friends, or his teacher when I relayed the story soon after. And then he smiled and walked away into the dining-room, very quietly and composed.

This week he came to the site with a new piece of personal wardrobe…baby blue ear-muffs. Watch out for those photographs sometime soon!