It has been many months since we said our goodbyes to Hope, Arandas, Muhawish, Amra and Khawla but we are thrilled when we recieve updates about how they are getting along.

The latest update shows that there have been many changes for our 5 friends, the biggest being the introduction of a new member to their pride - no other than our sweet Saba who joined the pride in June.

Below is the full update we recieved from our dear friend Hildegard Pirker at Lionsrock...

The 5 cubs, which had to be sedated for their relocation in the new enclosure, were darted and given first a thorough examination. As we had seen over the past months since they arrived, Hope and the smallest female Khawla developed sometimes severe limping most likely as a result of malnutrition, which we treated with oral medication. So it was the best opportunity while sedated to treat all of them with a boost of all the vital vitamins and calcium to improve their condition and prevent future problems in their growing development. The sedation was soft and not long after we placed them in their new enclosure, one after the other started waking up. While they were still dizzy and unstable on their feet, we could see that all of them immediately recognized that Saba, who arrived only 2 weeks ago, was now between them. Saba, which was since his arrival had been separated from the group, could now be inspected closely. Saba himself was also keen to finally smell and groom his new friends and kept following everyone excitedly until he made physical contact with each one of them. Hope was a little confused about this attention to the newcomer trying to get between Saba and the younger cubs, when she felt the introduction became to rough. Arandas on the other hand, as the 'biggest' male in the small pride, felt that he had to challenge Saba first, showing him his male qualities, before he decided that Saba was no threat to his pride and could become his friend. 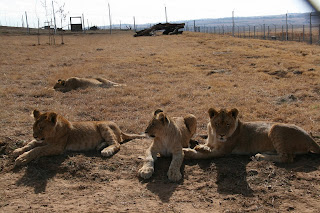 At the end of the day, after exploring their new home, the group settled at their new little house, providing them shelter and safety for the night. 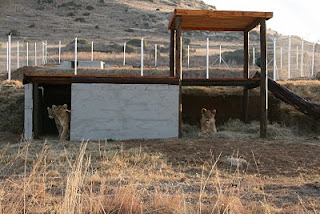 The next morning the group was already waiting keen for us to bring their food. Without any problems they came in the feeding area to have their first meal in the new home. The feeding showed that Saba was fully accepted by the group, as all of them fed peaceful together.
Seeta was all the time close at the fence watching their every move following them up and down the enclosure. Today she seemed to have overcome  her curious excitement and settled calmly on her favorite outlook spot. As I mentioned in my last email, she is really amazing and when we put her meat with the next feeding in the feeding area, she did only hesitate a view seconds before she came in to fetch it  with trustful calmness. 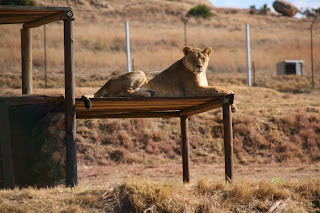 We couldn't be happier with the news that everyone is doing well and that Saba, for the first time in his life, has a family which he may now call his own. As for Seeta...the picture says it all!!
Posted by Princess Alia Foundation at 00:03