We have told you all about the animals with us at the New Hope Centre, but never the never the engine driving the place! By that I mean the invaluable staff. We are lucky to have found a team of 3 permanent staff members who work all hours to ensure the care and safety of the animals. This team is headed by Riyadh who has a special way with the animals creating trusting relationships and re-instilling within them the fact that they can trust a human being. Along with Riyadh we have Tha'ir and Khalid who tirelessly work to make sure that all the shelters are clean, the enrichment is secure and all animals have fresh water etc...

Along with the permanent staff we have 2 vets from GAM who keep a watchful eye on the health of the animals and the latest member of our New Hope Team is Zain, a 5th year veterinary student who spends every spare minute she has with us and has proved to be a valuable asset to the team.

Without these committed individuals, our lives and those of the animals would be a great deal harder! 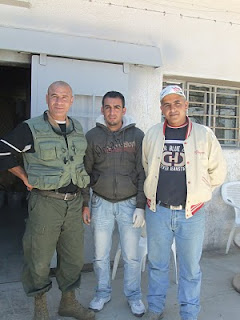 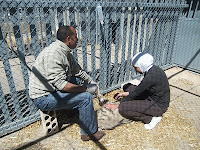 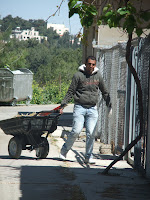 Khalid on another trip back from the skip. 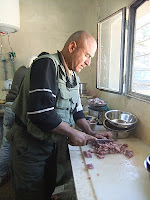 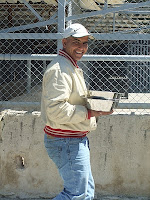 Tha'ir helping out with breakfast. 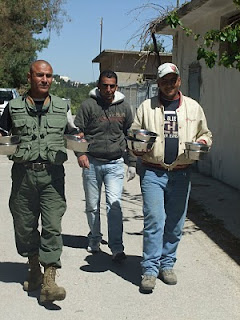 Team work is the secret of New Hope's success!


A big thank you to all those who have helped, supported and dedicated their time to making the lives of the animals at the New Hope Centre a better one.
Posted by Princess Alia Foundation at 20:33 No comments:

The room was small, had hardly any sunlight, no bedding and nowhere to escape the damp and puddles of water which was still there after the rains of the last week. There were puddles of water everywhere and the smell was one of damp and mould mixed with rotting bits of garbage which had been thrown into the room.

Sitting in the corner on the only patch of dry ground, her pride still apparent, not allowing any of this to break her spirit is a beautiful Serval. Her condition was seen to be very poor due to her prolonged diet of chicken feet and heads. She was in one of the local zoos.

The Serval is now at the New Hope Centre and recieveing the proper care and diet she deserves. We are pleased to report that she has adapted very well to her new environment and has plenty of space to move freely and many areas within her enclosure to keep her busy as well as provide her with the feeling safety with many areas for her to hide in. 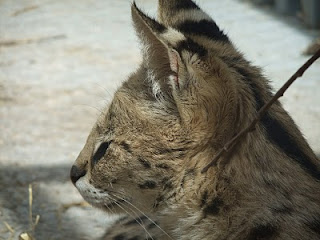 She spends her days lying in ample amounts of straw in the sun and when it gets too hot for her she chooses to lie under the tree trunks and leaves which we provided her with. She also enjoys watching us come and go and is very interested with the other animals at the centre. 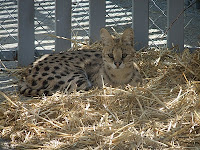 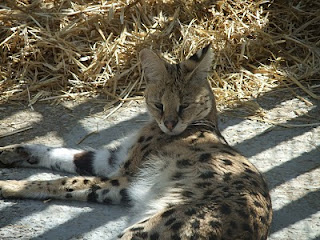 We hope we will be able to provide her with a happy ending and we will keep you posted... 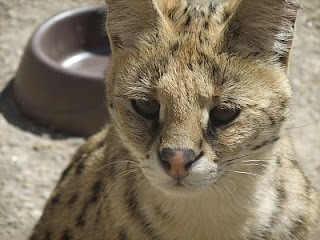 Posted by Princess Alia Foundation at 14:37 No comments:

A hard day's work and much more to be done...

“We have zoos in Jordan?” is the usual response to the fact that there are zoos in Jordan.
It is with great regret that we admit that the facilities here are basically prisons for the animals they house. The enclosures are small, with no bedding. The animals do not have hiding places or night rooms where they may take ‘time-out’ from the hustle and bustle of the world around them and also this means that when and if the zoo keepers need to get into the enclosure for feeding, cleaning or watering they are also exposed to danger as well as the animal being beaten and intimidated so that it does not get close to the keeper. The animals do not have access to clean water, and in some instances do not have access to water at all! Many do not have shelter within their enclosures to provide protection from the cold or the heat. There is no bedding provided for the animals where most of them spend their lives on hard concrete floors in all weather. 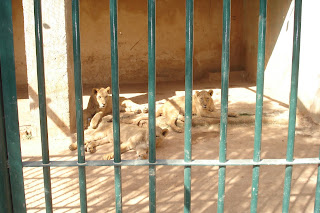 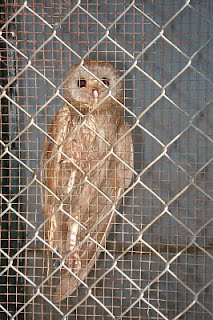 This owl clings onto the fencing of the enclosure as it has nowhere else to rest. Owls are nocturnal however this owl has nowhere to hide during the day which only adds to its stress and ill health.
In an attempt to make life better for the animals within the zoos, the Princess Alia Foundation dispatched two working teams to one of the local zoos who had shown a willingness to work towards better standards and care for the animals they own.

The first team consisted of a wildlife vet from South Africa along with five student vets from the Jordan University of Science and Technology and one of our local vets from GAM. The student vets were completing a 10 day practical training course with the expert vets in wildlife who had flown all the way from South Africa to help with our situation here in Jordan. The experts came from the Johannesburg Zoo and Lionsrock Big Cat sanctuary, and we were truly blessed to have had them here!

The second team consisted of a team who would tend to the enrichment of the enclosures themselves, this team was headed by Wendy Willson again from Johannesburg Zoo in South Africa and members of the team from GAM.

The two teams arrived at the zoo in the early morning and set about their tasks for the day, the aim of the working teams was to assess and treat all the animals at the zoo and to do on site training for the zoo keepers in enrichment of the enclosures and also to train them in animal handling.

They quickly set to work…

The vets treated all the zoo animals; the birds being in dire need of help

A farrier, known as Chacha, was on hand to tend to the donkey's terrible hooves:

This shows just how bad the donkey's hooves were.
The left hoof has been done.
Meanwhile the second team got to work on upgrading the different areas within the enclosures…

Some of the animals watched in wonder as the teams worked... 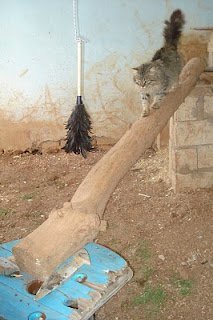 but were quick to try out their new toys!
The owls were finally provided with a shelter and somewhere for them to hide away during the day. They wasted no time in doing so... 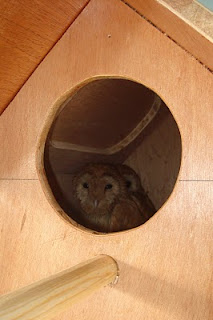 As for the monkeys; here are some before and after pictures which tell all...
Before:

The suffering of these animals on a daily basis is ongoing and we are realistic in our knowledge that these zoos may never reach even the basic standards, but until there is a better solution we have to try to provide for them as best as possible. If that means that they are busy climbing tree trunks or have somewhere to hide; are being fed better and not intimidated by the zoo keepers anymore, then we are one step forward.
Posted by Princess Alia Foundation at 22:03 No comments: