One of the latest initiatives from the Princess Alia Foundation is Growing Together, an equine therapy project for young people on the Autistic Spectrum. Situated near to the Royal Stables in Al-Hummar, the programme brings together horses which have been rescued and rehabilitated with children in need of specialized care. Suyen Talken-Sinclair has come over from the UK to set up and run the programme, and we are very grateful to have her with us. 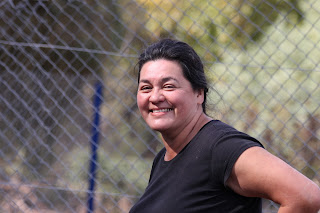 The site itself has been specifically designed to incorporate the natural flora and fauna, fresh running water, and nature walks with an aromatic garden, natural play area and indoor class-rooms. This has all been done with the intention of allowing children to relax and relate in a natural and holistic manner, as well as giving them an opportunity to interact with their equine therapists.

Growing Together started life as an idea only two months ago, but as if driven by the wind of Allah himself, the programme has gathered momentum and come to being in a remarkably short time. Less than two weeks ago the designated site was little more than a clearing under the trees, but since then, thanks to the amazing miracle-working powers of Major Faisal, the Director of the Royal Stables, and his team of workers, the area is now one of astounding beauty, complete with flower beds and an area of green that any cricket team would be envious of! 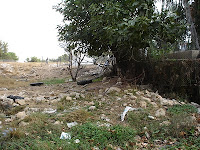 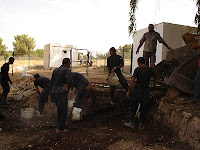 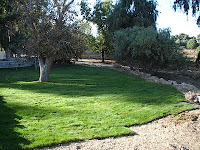 The therapy itself was inspired by the work of the Horse Boy Foundation, and the very positive results that equine therapy is having with individuals on the Autistic Spectrum in Europe and the United States. Equine Assisted Therapy is also being used overseas to treat a wide range of anomalies, such as eating disorders, truancy, anti-social behaviours and domestic abuse.
The first children arrived to be a part of Growing Together on Sunday, the 31st of October, and in homage to the date, some real magic was achieved. Every one of the children was amazed by the natural world around them, thrilled to be able to walk and run in the fresh air, and of course, to be able to interact with the horses. One of the children made his own personal history by speaking for the first time in a voice louder than a whisper, calling out “Horse! Horse!”
The horses, six in all, were wonderful, taking in their stride without hesitation or upset their new role as equine therapists. There is Reem, a very royal mare, who knows just how regal she is. Then Istabraq, a gentle lady who was a great favourite with the children. The third mare, Areej, is the true matriarch of our little herd, even if Reem thinks differently! The boys are represented by Iago, a chestnut gelding who catches the eye and is very relaxed. Burkan , himself once much abused, was really keen to meet all of the children, and made certain that he was the first in line to be stroked. Finally, the tall, dark and handsome one, Zippo, a black beauty with the most gentle and trusting of souls.
There are two more horses in the programme, Alain, a stallion who is a real gentleman, and Chance, a chestnut gelding who is very shy and wary of other horses. For this reason, Chance will only be used when there is a need for a one to one private session, and, of course, Alain needs to be quartered separately to the ladies! 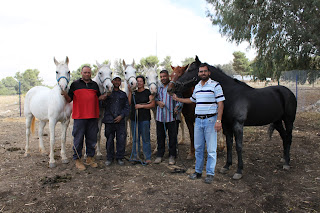 The Team!
After the first session, meetings were held with four other schools in the Amman area and each school has asked to be involved with the programme, making a total of thirty-two children who will be attending the sessions! These sessions are offered free of charge to the schools by PAF in the hope that children from all backgrounds will be able to access them.