A Glimpse of God 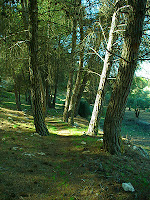 With 2011 now in the background and the New Year upon us, I have the privilege of having shared another term of Growing Together with familiar faces…Boys have grown taller, a little leaner, girls have become braver, teachers more relaxed and confident…and parents less anxious.
Most of all this past term, I have been struck by how the children have overcome their fears, the fear of the outdoor spaces, fear of animals often twice their size,  fear of animals usually only seen in fearsome films, fear of strange people and unfamiliar faces…Some of the children have made such advances over the past year that their schools are recommending that they join mainstream schools in September 2012.
There is a father who travels his eight year old daughter from Irbid, a town well to the north of Amman; he makes the forty-five minute trip every week so that he can widen his daughter’s circle of experience, give her another dimension to her very limited childhood. He earns 350JD a month, and specialized schools in cost up to twenty times that much for a year’s tuition…So he drives her to Growing Together, and has tears in his eyes when he says the only words he speaks in English: “Thank you.” He says thank-you because after only four sessions with the horses, his daughter has changed from a terrified child who would not go within fifteen feet of a horse to a girl who is laughing and chattering while riding one.
Then there is K…he has taken three months to even catch hold of the horse’s lead rope. His mother is exasperated. K used to love all animals until his cousins teased and scared him with the family German Shepard. Since starting Growing Together, K showed his latent desire to interact by anxiously holding out grass to his horse, but was still unable to bring himself to touch one…Finally, after three months, K found the courage to hold the rope, walk alongside his horse, and tentatively touch her with his finger. It’s a start. 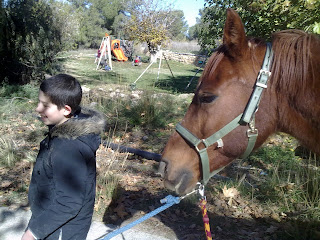 Another child of ours, A, a very bright and smart boy, who has always been very enthusiastic to lead his horse anywhere on the site, was still also very nervous about touching the horse…this is one of the frustrating ironies about children that have simply been “plonked” in a saddle without  developing any real relationship with their mounts…and resisted all attempts to get him onto his horse for several weeks.
One day, towards the end of term, with the help and support of his teacher, I insisted that A be placed on his horse. Iago, as always Mr. Reliable, stood like a rock, as A’s teacher and myself struggled to get A onto Iago’s back…
A struggled too, he kicked, he screamed, he cried..but I felt that we should persevere and his teacher supported my choice…All the time we kept talking to A, encouraging and praising him when he was eventually sitting on Iago’s back…He was still crying, but I could see that he was also taking in his surroundings from this new perspective..he began to cry quietly, stopped shouting…then he stopped crying, and then he started to smile. Within less than ten minutes his life had been changed. A sat on top of Iago and talked to his teacher, and when we set off to walk up the hill A was smiling and laughing, totally fearless.
It might be easy now, within this second year of Growing Together, to become complacent with confidence, to take for granted the humility of the horses, the courage of the children, and the dedication of the teachers and parents. It might be, but then one remembers that first word, that lightening smile on the first tentative reaching out to touch a horse, that laugh of joy, and then it hits you, and you realize that we are still being blessed, we are still seeing miracles, we are still being allowed our glimpse of God. 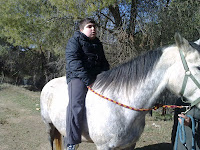 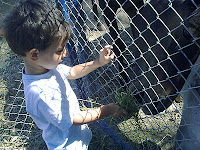 
Growing Together.
Posted by Princess Alia Foundation at 11:40 1 comment:

A class at the American Community School in Amman were set a piece of homework where they had to write about their Hero.

The piece below was written by Masa Dajani in Grade 5B and is piece which warms the heart and soul and yet again shows us that our children have the answers and hold the keys to a brighter future. Surely we must sit up and listen and give them a chance to make us better human beings...

On behalf of all of us at PAF we invite you to enjoy this beautiful account and we thank you Masa for allowing us to share your message and to learn so much from you.

Hero
By: Masa Dajani 5B

My hero is a horse. I chose a horse to be my hero because he is beautiful, and most importantly helps so many kids in need. I love horses for that reason.

In Jordan there is a place called Growing Together that takes kids that have autism to see the horses because the kids can relate to the horses. They make physical contact and emotional bonds that helps the kids cope with their daily life.

When I am upset I go to the stables to see the horses. Horses make contact with your body, making you feel so much better. It is almost like horses are therapeutic because they have a sixth sense and that is seeing through you to help you when your sad. When you are nice to a horse, he will care for you and help you.

People that are lonely and have a hard time making friends can make friends with a horse very easily. Horses have been making friends with humans for over one million years. There is a movie called Black Beauty and it’s about a horse that saved a boy’s life because the boy saved the horse from choking.

There has been lots of children and adults that have been saved by a horse. For example on an island in the Netherlands horses saved people from drowning because they didn't know how to swim and the horses were born to swim.

Horses are heroic to me and lots of other people in the world. The world wouldn’t have as many people without horses. If you are free, go for a horse ride and you will feel what I’ve been feeling. Take a picture of your big smile because you will have one as soon as you put one leg in your stirrup
Posted by Princess Alia Foundation at 16:08 No comments:

Our Year in pictures 2011 at OneTrueMedia.com

A great deal has taken place across the world during 2011. As we welcome the new year we look back at 2011 and the some of the work accomplished...

Make a video - it's fun, easy and free!
www.onetruemedia.com
Posted by Princess Alia Foundation at 23:45 No comments: