Another year of GT...


It has been another busy year at Growing Together where we have seen many new children join us and have said farewell to others who have moved on to other countries, and each and everyone remains in our hearts.

We have been blessed to have seen wonderful improvements in children’s social interaction, and their degree of self-confidence, and this year we have widened the client group to include more children with special needs other than those on the Autistic Spectrum. Our regulars are growing quickly, and some of them will be starting lessons in main stream school in September.

One of them, G, came to us very frightened and hardly speaking when we first started the programme. His mother, who has become a loyal supporter and much needed liaison with non-English speaking teachers, was deeply worried that her son would never speak fluently nor be able to have a full education. Her son would shrink away from the horses and cling to her, and even when on the horse he would continually say “scared.” It was this boy whose first sentence was “I love the horse.”
G has progressed to be able to ride his horse Shimmer, a large 15.2hh ex-Polo mare, confidently and independently, he now chatters away to his mother non-stop, and will be at main-stream school four days a week at the start of the new scholastic year. 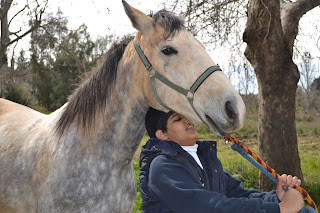 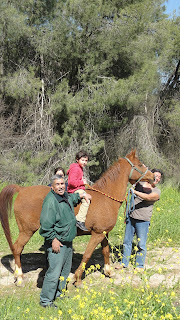 Another one of our children, K., who is seven years old, was also deeply anxious when near a horse, although very keen to feed them. He would hold out handfuls of grass but drop the grass immediately when his horse Katirah, a beautiful chestnut Arab mare, came close enough to eat. We worked with K, with strong support from his parents and teachers, for over six months to have him lead his horse confidently using a lead rope. His mother told me that K has always loved animals until his cousins scared him badly with a large dog when K was about three years old. She was very distraught at the change in K and had little hope of any improvements. K spoke his first word for us with “Wolf!” and made his teacher cry that day with joy.
Eight months after starting GT we now have K riding happily and saying many more words. We started out by placing him on a horse with much encouragement and asking him to count to five and then taking him off, then we counted to ten, then twenty…Now he rides for half an hour.

Towards the end of the year GT welcomed a new child who had been the victim of extreme institutionalized abuse. He arrived with his father and brother, sitting in his wheel-chair. His father told me that A used to have a horse years ago and loved riding….Would he be able to actually ride the horse? For A. our old stalwart Iago, whom, although now retired from GT, remains always very keen to get involved with any children in need of that need an extra-special equine presence! To begin with we asked A to hold onto Iago’s rope while we led him around a small area and A was wheeled along beside him. Then, seeing the joy on A’s face, we asked his father to lift A onto Iago, who at a compact 14.2hh wasn’t too much of a stretch! Although A had total muscle wastage in his legs, we were able to balance him on Iago and lead him down the various nature trails. The first session wasn’t too long as it will take a while for A’s core muscles to accustom themselves to the additional physical exercise, but the brevity of the session was definitely inversely proportional to the pleasure it gave our new client and his family. Having hardly spoken a word since leaving his institution it brought tears to everyone's eyes when he voluntarily repeated time and time again one word..."Iago".

One of the other new children to join us suffers from cerebral palsy and is also confined to a wheel-chair. He had never seen horses before coming to GT but was totally enamoured with them, happily feeding Shimmer by hand from his chair. It was one of the most touching moments of the year to watch the interaction between our wonderful equine therapist and the boy sitting beneath her, both of them totally trusting of the other. 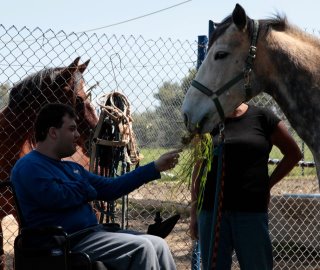 Some of the children to join GT this year have Down’s Syndrome, and one little girl has found her heaven on the back of a horse. From the moment she gets on board to the moment she has to get down, all she does is smile, and laugh, and talk. Pure Happiness. 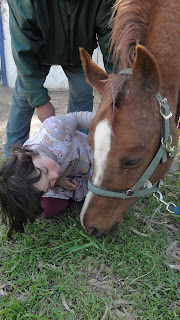 Not all of the children come to GT through schools, we now have several children who come in the afternoons with their parents for a one-to-one session. Rakan is one such child. He is only three and a half, and already he has established a bond with Reem, the pure bred Arab mare that he rides, and identifies the image of a horse by the name of his equine friend. Rakan is not on the Autistic Spectrum but has had other developmental issues, and his parents were eager to explore any alternative therapies that might enrich their son’s life.
Having spent a year with GT, Rakan is certainly a much better rider. Even at three, he sits up straight and balances well, with only minor assistance from helpers. He definitely enjoys himself! His mother tells us that the riding seems to have improved his core muscle strength noticeably, so much so that she was always encouraging us to let him go faster! The strengthened core has also helped Rakan with his walking, and he can sometimes hold onto his horse independently. 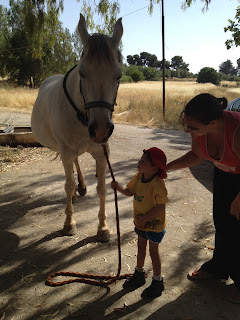 We would like to thank Rakan’s mother also for all of the help and assistance and support she gave to us for the GT sessions. 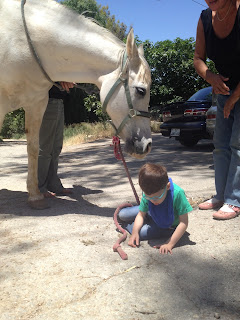 This year also sees the end of Suyen's time with us at Growing Together. Suyen has decided it is time to return home and all of us at PAF wish her all the best in her future endeavours. Suyen has shown all of us that through patience, love and kindness anything is possible and we will be forever grateful to her for leaving her home and family behind and coming to Jordan to help us establish and run GT and we hope to see her once more (even if for short visits) walking up and down the path of GT.

As for the future of GT...since mid June the numbers of students has more than doubled and we have taken on two new members of staff in whom we have every confidence to carry on as we grow, along with our ever noble team of horses, and we look forward to many new miracles at Growing Together...

At one of Suyen's last sessions, one of the teachers asked a child what Suyen's name was as he was riding along a trail.
“Miss Su,” the teacher suggested, as the child seemed to hesitate and ponder the question.
“Miss Husan (arabic for horse),” the child replied…..Miss Horse 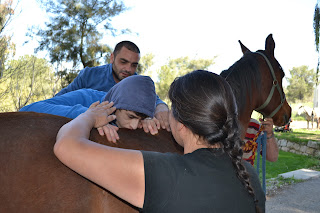 Posted by Princess Alia Foundation at 10:27 No comments: