Along with young Eddie the bear cub, there was another young cub at risk at the zoo. This young one was a 3-4 month old tiger cub. He was found immobile in his enclosure and everyone said he was 'just asleep'. At closer investigation the vet saw that he was severly dehydrated and in need of immediate medical treatment. After further investigation, the team was told that there were in fact more cubs with this little one, but sadly they passed away. It was a major priority for the team to get this cub to New Hope and start treatment.

With great relief we were able to get him out the same night and when he arrived at New Hope, although he was slightly dazed by his trip, he darted straight out of his crate into the warmth and comfort of piles of straw in his new enclosure. After some initial treatment and careful observation, he even became interested in his neighbours, the two other tiger cubs at New Hope. 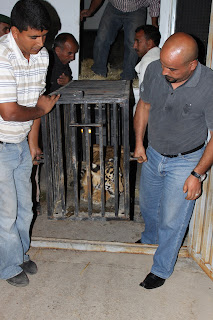 It was a difficult few days with the young cub where we watched him closely and monitored his eating patterns and movement. He seemed to be very interested initially in his fresh water and milk, however the food we had given him did not seem so appealing. Anxiously we waited to see if he would eat or if we needed to intervene. Two days after his arrival we were thrilled to see that he had eaten a whole bowl of food and was even starting to play and communicate with his friends! 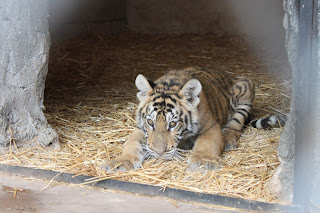 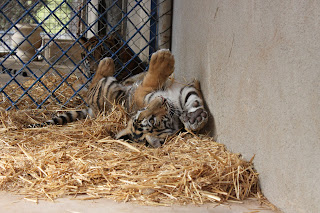 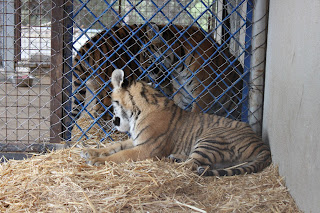 Although we still watch him closely we are more confident that he is now on the right track!
Posted by Princess Alia Foundation at 21:41